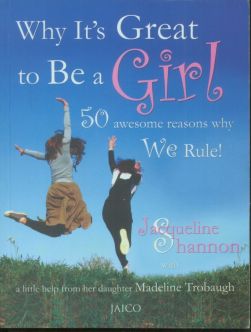 Imparting a wealth of information through a collection of anecdotes, Jacqueline Shannon’s book for girls gives a boost to their ego. By Deeya Nayar-Nambiar

Far away from the madding crowd of the saas-bahu serials, tears and indulging in self-pity, Why It’s Great To Be A Girl: 50 Awesome Reasons Why We Rule! is a perfect treat for all girls entering adolescence, giving them a brushing up on girl power and the need to recognise their hidden potential.

Women have done better things in life than just be known for being talkative. Not only do they speak more number of words, they are also good listeners. Girls are better at communicating their thoughts with instant messaging and they even have longer attention spans than boys do. Jacqueline Shannon has in an interesting way gives many anecdotes from all walks of life to prove her point.

There is probably a point in the brain pattern and the way women think, but history has witnessed women as change-managers and intruders who entered prohibited areas and came out with flying colours. Otherwise, we would have had only men as doctors and engineers.

Shannon wrote the book based on her daughter Madeline’s pre-school experiences – the gender bias that she encountered when she was asked what she wanted to be when she grew up to which she answered “a doctor” being just one instance.

Shannon is fair in her observations and without being prejudiced has tried to knit both the positive and negative aspects to her reasoning. Hence, though “the bad news is that women run fewer than 2 per cent of Fortune 500 companies…. the good news is that the number of woman-founded businesses continues to rise every year.” She takes pride in the fact that girls drive better than boys do.

Moving from its original version, Why It’s Great to Be a Girl: 50 Things You Can Tell Your Daughter To Increase Her Pride in Being Female (1994), the latest book is updated and expanded with the help of Madeline, who is now in college. In the process she has attempted to go global with her anecdotes to reach out to an international audience. Still, most of her anecdotes cater to American readers.

A wealth of information, a collection of anecdotes, Why It’s Great To Be A Girl: 50 Awesome Reasons Why We Rule! doesn’t promise to be a guide but is an attempt to boost your self-esteem. “The choice is ours, and even the sky is no longer the limit. That’s why now, more than at any other time in history, it’s great to be a girl, wonderful to be a woman, fantastic to be a female.”

Published in May 2008, btw of Chitralekha Group

One thought on “Fantastic To Be A Female”

We only live once. Hence, let's not stop dreaming

My Third Eye Vision...Vision of a Naturalist!

Law that attracted me!

Live the best of your life. Positive bright Hayat.